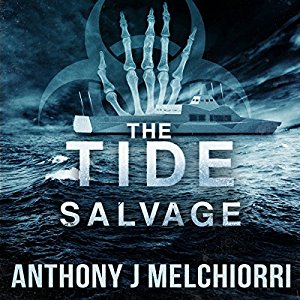 Ok I will come clean… I’m an big fat idiot! I brought this title by mistake. Don’t ask me how because I just don’t know how. I certainly don’t have any money to burn… I am so poor that the ducks throw bread at me.

So with the confession of me being dumb and broke out of the way. I was thinking about going through the process of returning this title. I mean who would start listening to a series at Volume 3?

I thought I would just sample it before I made up my mind. I’m glad I didn’t return it, because as I ‘sampled’ the story, I soon discovered it was good enough to stand on it’s own merit.

Like I said this was the first I have heard of the series and I was generally intrigued by the story. It isn’t a normal zombie story. In fact the ‘zombies’ are more monsters like in the fashion from ‘Torment’ by Jeremy Bishop. Which was one of my first ever reviews… I loved that one as well!

I do have to get one gripe of my chest… the narration… it is just too slow! I easily listened to this one at 1.5x speed. I do normally listen to most titles at 1.25x speed but even at 1.5x speed on several occasions I wished I had a 1.75x option. In my view if a person has to increase the narration beyond 1.25x speed, then the customer is being ripped off in the adverts price of the title. 1.5x is just too much, it deceases the listening time dramatically! This in turn alters the $per listening hour ratio that people like me take into consideration.

I guess the best way to determine what I really thought about this title is for me to answer the question; ‘am I going to buy the 2 previous books in the series?’ The answer is no. I don’t think I need to.

But, and it is a big BUT (much like my own but) ‘am I going to purchase the next in the series’? And my answer would be ‘yes’.

I did like this one and I suspect those who are not as dumb as me. Those smarter people who actually started the series at number one would also be keen to see this series through to the end.