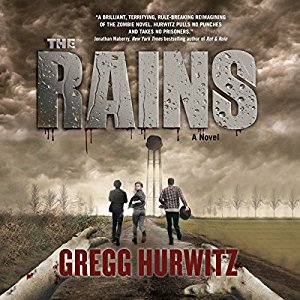 After I finished the audio book I thought I would read some of the other reviews before I got started on my own. In doing so I was a little disappointed to read some reviewers refer to this one as a zombie story. It is not a zombie story but there are some similar characters from popular zombie titles. For example, the main character ‘Chance Rain’ reminds me a lot of Zach Gunderson from ‘Zombie Rules’. Both characters are young, smart and struggling with a hard luck story and both are looked as gifted leaders despite being so young. As the story unfolds I can’t help but be reminded of ‘Falling Skies’ and ‘The 5th Wave’.

The narration is clear and at a fair speed. I only turned this one up to 1.25x speed, meaning the original listening time of nearly 10 hours listening time was not decreased too much. This might be important for people whose purchasing decisions include a $/per hour factor.

I can’t help but think that the story is aimed at a younger audience (not kids). The lack of swearing, and the lack of sex scenes is unusual in this type of thing.

This one was a step away from my usual zombie genre and truthfully I wasn’t expecting much. However, I was kept interested the entire time. It had just enough twist and turns to keep me coming back to it. The narration suited the main character. There was just enough tension (I did not get worked up over it and upsetting my already upsetting work day!). I did get the sense that this one is going to be a long series and I will at least be willing to give the next one a go!

This ‘fatman’ is willing to give this title two fat thumbs up with a small ‘heeeeey’ being thrown into the mix… not a full on… loud and smiley ‘HEEEEEEY!’ That might be reserved for the next one, if and when it should appear in the series.