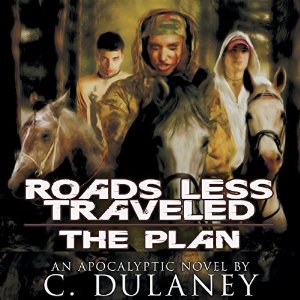 I have put off listening to this one for sometime, not for any other reason other than I didn’t like the art work on the cover, and because I have never listened to a book with this narrator. I know I am sad person, but with so many great titles all fighting for my money, and with me being such a stingy scrooge… you get the picture. But, then it became available at a special price. I can never look past a discount. Perhaps, that explains my life, surrounded by broken cheap things!

I know this one has been reviewed a lot, and honestly those reviews are pretty well written. So I wondered why should I even bother writing a review on this one? However, the more I thought about it the more I came to realization that the zombie genre really has delivered some pretty impressive curve balls of late. So perhaps a more recent review with some contrast to some of the newer one’s might help some people make a purchasing decision.

A zombie title without werewolves, vampires (we are all looking at you Mark Tufo), and terrorist attacks, God v Satan battle, artificial intelligence, robots with zombie drivers inside, or even a ninja in a squirrel outfit is really a rarity these days… Yes there really is a zombie book with the main character wears a squirrel outfit. Perhaps in the next one or two books in this series some or even all of these things will appear… but I doubt it. This seems to be your classic run to the mountains, follow the plan type deal. I’m not saying this is bad or good. Just letting you know so you can make informed decision on what you are buying.

Personally I like my zombie titles with a lot of humor, comic style (very adult) comic style violence. I’m not a real fan of those zombie stories, which take themselves too seriously. So titles by Jake Bible are my favorite at the moment.

More recent ‘serious’ zombie titles like the ‘Arisen’ series written by Michael Stephen Fuchs and Glynn James step the modern times and action up a notch or two. But the ‘Arisen’ series suffers by the fact that it is really just one or two books divided into multiple parts in a cash grab type deal… Yes I am back to my stingy nature!

So this title falls right in the middle of these types of zombie genres. Others do the humor better, others do the action better, some even do the story line better. But, and there is always a but! This title does nothing wrong. I couldn’t put it down. I couldn’t help but think, ‘that’s a good plan, I think I would do the same’.

I am going to purchase the rest in the series even if it is full price! Yes you heard it here… Just don’t tell anyone as I have a reputation to uphold!

Oh and I almost forget to mention the narration. It is pretty good, easily listened to at 1.25 speed without any problems. And really I wanted to speed it up more so I could hurry up and find out what happened! Only on a couple of occasions did the female narrator struggle to do the voice of some of the male characters. But it certainly didn’t distract me from listening to it. Elisabeth Rodgers is no RC Bray but I would have no problem purchasing a title she narrates in the future!