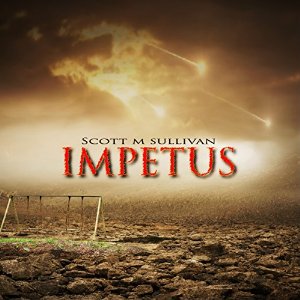 The blurb for ‘Impetus’ reads

When the world first heard about the meteorites, it was already too late. Ten arduous years later, Mick and his small group of eight had adapted to the new way of things. With no clean running water, power, or forms of communication, the Earth went backward, taking with it almost everything they held dear. Survivors like Mick were forced to do the best they could with what they had. Because in the post-Impact world, alternatives were a luxury that no one could afford. Now a deadly virus threatens those who were unfortunate enough to survive. With the clock ticking down on their lives, Mick will navigate the deceitful webs spun by those that oppose his drive for salvation. And along his quest to prevent another catastrophe, Mick will rediscover what it truly means to be human.

Impetus does away with the genre’s tendency to dwell solely on the catastrophe, to instead examine the very-real human experience and condition behind a world-changing disaster.

This seems to be the first audiobook by Scott M Sullivan on audible.com so I did not have any idea what to expect. The story is exactly as described in the blurb. The blurb probably oversells the story somewhat as it was really pretty simple good guy verses bad guy type affair with some tension thrown in involving the main characters kids. There is no great detail regarding the meteorites, not a lot of information regarding the decline of civilisation. I kept on expecting more information, perhaps flash back type chapters, something else to give more detail. I think this could have been achieved considering the audiobook is only 7 hours and 20 minutes in length. I don’t want to sound as though I didn’t enjoy the story, because in truth I did! But I get the sense it could have been a lot more. Perhaps the author has a second book coming?

The quality of the narration was good, no background noises or any other distractions. The narrator Tristan Wright has certainly been busy with titles on audible but mostly with shorter minecraft titles. I listened to most of the book at 1.25x speed and some parts at 1.5x speed. This did not distract from the listening pleasure and is an indicator to me that the narration was a little slow. So once again this fact impacts your $/per hour equation. I don’t have a lot of cash to burn, and I hate it when I pay more than half of what I earn per hour to listen to a book!