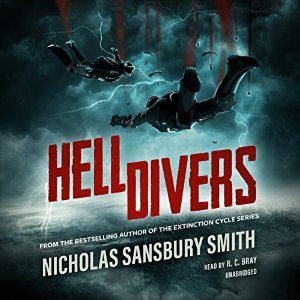 What attracted me to this one in the first place was name of narrator; R C Bray has the ability to turn a average title into good one. I have no idea how he does it? He is a freak if you ask me… I suspect he has some kind of secret super power to draw me in!

While I had many times seen the other titles belonging to Nicholas Sansbury Smith but I had never given them the time of day. I don’t know why? Perhaps it is just the covers. Like I said I don’t know why, it could be something as stupid as I once knew a kid called Nicolas and I didn’t like him very much. However, after listening to this one I might give his other titles a go. This one was original enough to make me test the waters more with his other titles.

I do get the feeling that this one could have easily have been a much longer mega series. I hope it does continue as I think it certainly merits it.

I listened to this one over the course of two days, so it did suck me in. As per usual with Bray’s narration I turned the speed up to 1.25x speed and was happy. Also as per usual the quality of the recording was excellent!

The story itself was a break from my usual zombie genre, but it was still in my ‘end of the world’ scheme of things. What can I say some people want to see the world burn! The story itself reminded me of another title I had reviewed about an year earlier called Sixth Cycle which was also narrated by R C Bray. The difference being I liked this one more.

The fast fat man is giving this one two big thumbs up with a stupid grin on my face!