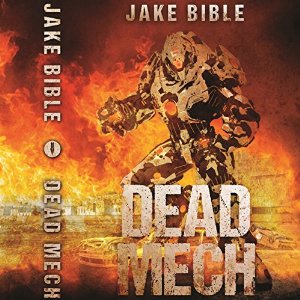 Jake Bible has become one of my favourite authors. First he got me hooked on his ‘Z Burbia’ series which is my favourite in the zombie genre. But now I discover his ‘Dead Mech’ series. I’m not sure which one he wrote first, but the Dead Mech series is a much better read than a audio book. The narrator just has too many voices, to many characters to do on her own. This would have been much better with multiple narrators. However, in saying that I still loved the audible version! It delivered with enough interesting ideas to keep me glued.

The story is a long one, over 16 hours. This seems to be rather unusual now days. Even more unusual was that the speed of the narration was not really able to be sped up any more than 1.25x speed without making it difficult to listen too. So you do really get your money’s worth in terms of $per/hour.